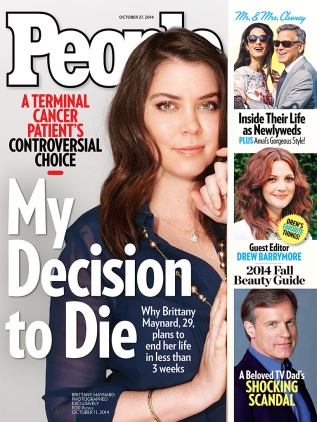 Sorry that this is a bit off-topic, but I’ve been following this story about 29 year old Brittany Maynard who was diagnosed with stage 4 brain cancer. She moved from California to Oregon because she wanted to end her life (legal in Oregon) rather than suffer through a longer and painful death from the spread of this terrible disease. I completely sympathize with her and other victims of terminal illnesses who want to “die with dignity.” If I were in their shoes I’d probably do the same thing.

What bothers me about this is how the media treats it. Let’s call Ms. Maynard’s decision what it is – suicide. The media treats her decision to end her life as something noble and admirable with fawning coverage from major newspapers to supermarket tabloids to morning television. She is very telegenic and, again, I mean this in a very sympathetic way.

Unfortunately, all too often the suicidal don’t suffer from a terminal illness but from an excruciating inner pain for which death seems the only antidote. That was my 17 year old daughter Casey. Unlike Ms Maynard, Casey and so many others who took their lives didn’t get the cover shot on People magazine or interviews from traditional and online media. No, their same decisions were met with scorn and derision, as there remains a cloud of shame and stigma over suicide as opposed to “dying with dignity.”

I’m sure that the media will salivate over Ms. Maynard until her final moments, and I wish her and her family the very best. This is a terrible decision for a young woman to make. I just wish that my daughter and so many other victims of suicide (like, most recently, Robin Williams) were accorded the same degree of respect.

4 thoughts on “Dying With Dignity Versus Suicide”