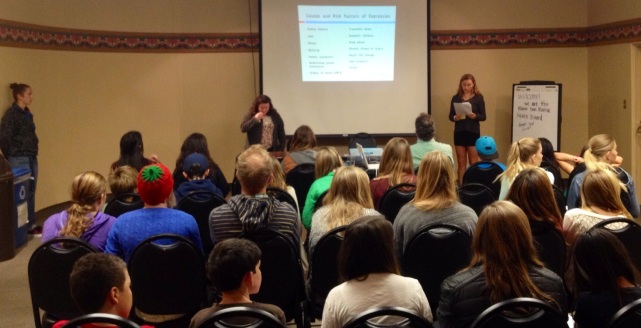 I lead a small group of Marin County high schoolers who make peer-to-peer presentations to kids and parents about mental health issues like depression and suicide. We’re called the Marin Teen Mental Health Board, a bit of a mouthful coined by the founders, two therapists who have since handed the group over to me.

I wouldn’t say suicide is rampant in Marin, but every death of a child at his or her own hand hits with the force of many more adult deaths because it’s completely out of order. Last year, an eighth grade boy at my local middle school took his life. This past August a girl – a senior at Redwood High School, just like Casey – jumped off the Golden Gate Bridge. In fact, August may well have been the deadliest month on record with ten suicides alone.

This past week our little group presented at the Peer Summit, which is an annual gathering of Marin County middle schoolers who are treated to presentations on a host of social issues – sex, substances, loneliness, stress, body image, among others. We were across the hall from Dating 101.

Considering the difficult and taboo nature of our subject it was gratifying to play to a packed house of kids and a few adults. I let the teen presenters run through our PowerPoint, and then I spoke for 5 to 10 minutes about Casey’s story – the events that led up to her suicide, what we discovered about her state of mind in the aftermath, what I learned about the trauma she must’ve faced in infancy and resultant attachment issues and what I would have done differently. As I talked I noticed a girl in the audience with tears in her eyes. In the back of the group a woman likewise dabbed her eyes.

What was really eye-opening were the hands that shot up once I asked after Casey’s story, “Are there any questions?” I’m used to kids saying nothing, either out of boredom or self-consciousness. This group was unusually inquisitive and unvarnished by judgment. Here is a sampling of their questions:

When you lost Casey to suicide, would it have made a difference if she were your “real” daughter? (i.e. your biological daughter)

Did you tell Casey’s birth mother what happened?

Who took her death harder? You or Erika?

Was she your only child?

Did Casey’s friends know that she was suicidal or had a plan?

How did you find out that she jumped?

Did they find her body? If not how do you know she’s dead?

You said that suicide was the fourth major cause of death among 10 to 14 year olds. What were the top three?

What advice would you give to adoptive parents or an adopted child? (This one came from an Asian girl who furiously scribbled my answer into her notebook. I wondered if she was adopted.)

I had to cut off the Q&A because we were running out of time, but clearly these kids were just picking up steam. When the session was over I wandered among the kids thanking them for coming. Two girls came up to me.

I felt that familiar tennis ball in my throat. Of course I did. That made everything worth it. But more importantly it taught me, too late, that we adults often underestimate youngsters’ level of maturity and what they can handle. As much as we want to freeze them at five years old, these days they are much more world-wise than we’re comfortable with.